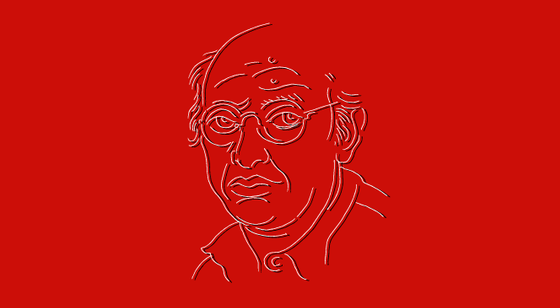 Milton Glaser (b.1929) is among the most celebrated graphic designers in the United States. He has had the distinction of one-man-shows at the Museum of Modern Art and the Georges Pompidou Center. He was selected for the lifetime achievement award of the Cooper Hewitt National Design Museum (2004) and the Fulbright Association (2011), and in 2009 he was the first graphic designer to receive the National Medal of the Arts award. As a Fulbright scholar, Glaser studied with the painter, Giorgio Morandi in Bologna, and is an articulate spokesman for the ethical practice of design. He opened Milton Glaser, Inc. in 1974, and continues to produce a prolific amount of work in many fields of design to this day.


To many, Milton Glaser is the embodiment of American graphic design during the latter half of this century. His presence and impact on the profession internationally is formidable. Immensely creative and articulate, he is a modern renaissance man — one of a rare breed of intellectual designer-illustrators, who brings a depth of understanding and conceptual thinking, combined with a diverse richness of visual language, to his highly inventive and individualistic work. *

Born in 1929, Milton Glaser was educated at the High School of Music and Art and the Cooper Union art school in New York and, via a Fulbright Scholarship, the Academy of Fine Arts in Bologna, Italy. He co-founded the revolutionary Pushpin Studios in 1954, founded New York Magazine with Clay Felker in 1968, established Milton Glaser, Inc. in 1974, and teamed with Walter Bernard in 1983 to form the publication design firm WBMG. Throughout his career, Glaser has been a prolific creator of posters and prints. His artwork has been featured in exhibits worldwide, including one-man shows at both the Centre Georges Pompidou in Paris and the Museum of Modern Art in New York. His work is in the permanent collections of many museums. Glaser also is a renowned graphic and architectural designer with a body of work ranging from the iconic logo to complete graphic and decorative programs for the restaurants in the World Trade Center in New York. Glaser is an influential figure in both the design and education communities and has contributed essays and granted interviews extensively on design. Among many awards throughout the years, he received the 2004 Lifetime Achievement Award from the Smithsonian Cooper-Hewitt, National Design Museum, for his profound and meaningful long-term contribution to the contemporary practice of design.

* Excerpted from CSD, August/September, 1999 — "Milton Glaser: Always One Jump Ahead" by Patrick Argent


PUSHPIN STUDIOS
In 1954, Milton Glaser, along with Reynold Ruffins, Seymour Chwast, and Edward Sorel, founded Pushpin Studios. For twenty years Glaser, together with Seymour Chwast, directed the organization, which exerted a powerful influence on the direction of world graphic design, culminating in a memorable exhibition at the Louvres Museum of Decorative Arts in Paris.

NEW YORK MAGAZINE
In 1968, Glaser and Clay Felker founded New York magazine, where Glaser was president and design director until 1977. The publication became the model for city magazines, and stimulated a host of imitations.

WBMG
In 1983, Glaser teamed with Walter Bernard to form WBMG, a publication design firm located in New York City. Since its inception, they have designed more than 50 magazines, newspapers and periodicals around the world. WBMG has been responsible for the complete redesigns of three major newspapers: The Washington Post in the U.S., La Vanguardia in Barcelona, and O Globo in Rio de Janeiro. It has consulted on design projects for The Los Angeles Times, The Boston Globe, The Dallas Times Herald, The East Hampton Star, the New York Daily News and the National Post (Canada). Magazine clients in the United States include: Time, U.S. News & World Report, Adweek, Brill’s Content, Crain’s Chicago Business, Family Circle, Golf Digest, The Nation, Autoweek, Biography, USA Weekend, PC Magazine andWine Spectator. WBMG has created original prototype designs for Manhattan, Inc., Windows, The Journal of Art, and ESPN, the Magazine. In Europe, WBMG has developed and created the original format for Alma (a women’s service magazine) and Zeus (a cultural newspaper). The firm has redesigned L’Express, Lire (a French literary magazine), Jardin des Modes (women’s fashion), L’Espresso in Rome and Business Tokyo in Japan. WBMG has also designed the American Express Annual Report for three years, as well as several books, including Steve Salmieri’s Cadillac and Muhammad Ali: Memories for Rizzoli and ESPN’s SportsCentury for Hyperion. Walter and Milton are co-creators of "Our Times", an illustrated history of the 20th century, published in 1995.

MILTON GLASER, INC.
Milton Glaser, Inc. was established in 1974. The work produced at this Manhattan studio encompasses a wide range of design disciplines. In the area of print graphics, the studio produces identity programs for corporate and institutional marketing purposes — including logos, stationery, brochures, signage, and annual reports.
In the field of environmental and interior design, the firm has conceptualized and site-supervised the fabrication of numerous products, exhibitions, interiors and exteriors of restaurants, shopping malls, supermarkets, hotels, and other retail and commercial environments.
Glaser is also personally responsible for the design and illustration of more than 300 posters for clients in the areas of publishing, music, theater, film, institutional and civic enterprise, as well as those for commercial products and services.
Glaser’s graphic and architectural commissions include the logo (which has been described as ‘the most frequently imitated logo design in human history’), commissioned by the state of New York in 1976; the design of a 600-foot mural for the New Federal Office Building in Indianapolis in 1974; the complete graphic and decorative programs for the restaurants in the World Trade Center, New York, as well as the design of the Observation Deck and Permanent Exhibition for the Twin Towers of the World Trade Center in 1975. He has also designed a number of architectural projects including Sesame Place, a children’s educational play park in Pennsylvania, 1981-83. For a period of fifteen years, Milton Glaser was involved with the re-design of a principal American supermarket chain, The Grand Union Company, a project that included all the company architecture, interiors, and packaging. He was responsible for the interior design and concept for the 1987-88 Triennale di Milano International Exhibition in Milan, Italy, on the theme of "World Cities and the Future of the Metropolis". In 1987, Mr. Glaser was responsible for the graphic program of the Rainbow Room complexes for the Rockefeller Center Management Corporation, New York. Also in 1987, he designed the World Health Organization’s International AIDS Symbol and poster. From 1986–1989, he was responsible for the graphic design, theming, and signage for Franklin Mills, a retail mall in Philadelphia, Pennsylvania; and in 1988, he completed the exterior, interior, and all graphic elements of Trattoria dell’Arte, one of several New York restaurants he has designed. In 1990, Milton Glaser, Inc. was responsible for the overall conceptualization and interior design of New York Unearthed, a museum located in Manhattan’s South Street Seaport. In 1993, he designed the logo for Tony Kushner’s Pulitzer Prize winning play, Angels in America. The list goes on and on. At present, Milton acts as a design consultant for the companies featured in the case studies section among others like Target Corp.

WORLD-WIDE EXHIBITIONS
In addition to commercial enterprises, Milton Glaser’s work has been exhibited world-wide. Most notable are the following exhibitions: a one-man show at the Museum of Modern Art, New York (1975), and the Centre Georges Pompidou, Paris (1977), as well as the Lincoln Center Gallery, New York (1981), and Houghton Gallery, The Cooper Union, New York (1984). In 1989, Mr. Glaser had many exhibitions in Italy. One was a one-man show of posters at the Vicenza Museum, and another, "Giorgio Morandi/Milton Glaser," at the Galleria Communale d’Arte Moderna in Bologna. In 1991, he was commissioned by the Italian government to create an exhibition in tribute to the Italian artist, Piero della Francesca, for part of the celebrations on the occasion of his 500th anniversary. This show opened in Arezzo, Italy and one year later (under the sponsorship of Campari) moved to Milan. In 1994, The Cooper Union, Mr. Glaser’s alma mater, hosted the show in New York. In 1992, An exhibition of drawings titled "The Imaginary Life of Claude Monet" opened at Nuages Gallery, Italy, and in 1995, an adapted version of this show was exhibited in Japan’s Creation Gallery. 1995 also brought a Glaser exhibition to the Art Institute of Boston. In 1997, the Suntory Museum, Japan, mounted a major retrospective of The Pushpin Studios, featuring past and present works by Milton Glaser and other Pushpin artists. A major retrospective of his work opened in February, 2000 at Fondazione Bevilacqua La Masa in Venice.

DESIGN AND EDUCATION COMMUNITY
From the start of his career, Milton Glaser has been an active member of both the design and education communities. He has been an instructor and a Board Member at the School of Visual Arts, New York since 1961, and is on the Board of Directors at The Cooper Union, New York. He has been affiliated with The International Design Conference in Aspen since 1972 (president 1990-91), and the American Institute of Graphic Arts, where he was vice-president and co-chair of the 1989 National Convention. Among numerous professional awards, he is the recipient of The Society of Illustrator’s Gold Medal, the St. Gauden’s Medal from The Cooper Union, and the Prix Savignac for the World’s Most Memorable Poster of 1996. Milton Glaser is a member of The Art Director’s Club Hall of Fame and the American Institute of Graphic Arts (AIGA). He holds honorary doctorates from The Minneapolis Institute of Arts; Moore College; Philadelphia Museum School; The School of Visual Arts; Queens College, CUNY; the New York University at Buffalo, and London’s Royal College of Art. He is an elected member of the Pinocateca in Bologna, Italy, and in 1992 received the Honors Awards from the American Institute of Architects (AIA). He received the 2004 Lifetime Achievement Award from the Smithsonian Cooper-Hewitt, National Design Museum, for his profound and meaningful long-term contribution to the contemporary practice of design.